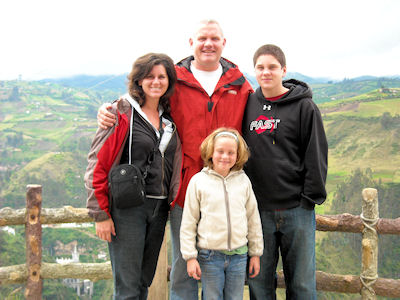 The plane landed in Quito, Ecuador. After more than 16 hours of traveling we were all tired, but we still had another 3 hours to go before we arrived at our final destination, a small town of 7,500 named Cotacachi nestled between the Imbabura and Cotacachi volcanos in Northern Ecuador.

It was spring break back home, and while most of our kids friends were spending their spring break visiting grandma or vacationing on the Oregon Coast, our kids woke at 4 am and spent 20 hours traveling to Ecuador for theirs. I admit, they weren’t all together pleased. What they didn’t know, and neither did we, was that in only 6 short months we would call Ecuador home.

We decided on Ecuador for spring break because we wanted to try something different, and by all accounts Ecuador was different. I was growing restless and unhappy with my career, and just felt that we all needed to get out of the rut that we had fallen into the past few years. At 11 and 6 years of age, our children probably didn’t know what a rut was, let alone that we had all fallen into one of them. Their lives were going along just fine, couldn’t be happier.

But what was also true was that their worldview consisted only of the Portland suburbs. And vacations to Maui staying at 5 star resorts, or more of the same in Mazatlan. All fine, but life beyond the suburbs and vacation resorts looks, tastes, and feels much different – and I wanted them to experience more of what was out there.

I moved around a lot when I was a kid, lived in many different states, and a few different countries. In many ways those experiences were what I cherish most about my childhood, and I wanted to share the fascination I felt learning about new cultures with our children. The world is becoming a smaller place, and I believe the success of their generation will in some part require them to bridge the gap between cultures, of finding ways to understand, appreciate, and connect with partners all around the globe.

That was the theory anyway.

Part of our stay was with an organized tour group, and part we were free to roam on our own. We had booked the tour portion late and because of this were not able to get a room at our original hotel choice, the hotel that most everyone in the tour group was staying. You know, the nice hotel. Instead, we stayed at an older place on the outskirts of town.

The first night we froze our butts off!

There was no heat in the room and too few blankets. The heater made all of the requisite noises; humming and whirring, and sounds of it clicking on and off, but no heat came out. So after a long day of travel and a poor night sleep, everyone was more than a little grumpy the next day.

We tried to move hotels to our original choice, but they were full for another night. What was great about this is that we found out mid-morning that we would have to sleep at the same hotel so the kids had an entire day to whine about it.

Instead we loaded up on blankets. Maid service brought a couple extra, but we told her to bring more, “mas XXXX, por favor.” She returned with two more blankets, we asked for even more. She gave us a look like we were crazy.

To make matters worse, the shower was not producing large quantities of hot water, barely small quantities. My wife had a hottish shower, my son had a warmish shower, I had a coolish shower, and my daughter refused to shower.

We had a better night sleep. We were all warm anyway. But the beds are a little small, and we are big, and nobody could get comfortable for most of the night. The beds are loud. I don’t think the constant squeaking noises emanating from underneath helped, but we learned from this experience to always pack a set of ear plugs when you travel. Good tip!

Still no HOT water! But the good news is that we still have lukish warm water any time we want it.

A llama visited the hotel every afternoon. His name was Yamingo, and while he wasn’t the friendliest of creatures, seeing a Llama roaming around was good fun for the kids – there weren’t many roaming the streets of our city back home.

We packed our bags and checked out of the hotel. We said our goodbyes to the llama, and took a taxi to our new hotel for the remainder of the stay.

Gina speaks Spanish, I do not. Neither do the kids. I didn’t need to speak the language to understand something was not right, the confused look on the face of the hotel employee and the mounting frustration on the face of my wife provide enough clues that we weren’t staying here tonight. Apparently we misunderstood, or the hotel misunderstood, but they had our reservation for the next night, and they were full and we could not stay there tonight.

We hailed a taxi and drove back to our favorite hotel and checked in, again.

The kids were excited to see Yamingo – it had been a long time.

We took the same room we had before.

I know what you are thinking, why didn’t we just change rooms? The answer my friend is that we did check out other rooms, but ours was actually the best of the bunch. Let’s just say that the hotel had seen better days, or at least had hoped for more of them somewhere in the past. Many of the rooms we found out didn’t have beds, or curtains, or hadn’t been cleaned for quite some time. Of the 25 or so rooms on the property we probably looked at 12 of them – ours was the nicest.

And the heat didn’t work anywhere on the property. We never understood why. We asked, several times, but something didn’t translate, some type of maintenance issue.

Call us crazy, but other than the hotel room, we liked the hotel. It was a convenient walk into town, the food was goodish, and you couldn’t beat the price.

A Room for the Night

Everything went according to plan, this time. We checked into our new hotel without a hitch. It was a beautiful building, with two-stories of rooms surrounding a central courtyard that was bathed in natural light from a skylight above. There was a small restaurant, a reading room, and it was located just steps from the town center.

The rooms were warm, and cozy, and inviting, the beds comfortable and silent. We were all excited to enjoy our last week in Ecuador with such fine accommodations. It was just perfect!

Turns out that there was no hot water, and they didn’t know when it would be fixed. The real problem was that it was now the 5th day of our trip and my daughter had not bathed since we left our home in Portland, Oregon, and began this adventure. All of us had drawn a line in the sand with her earlier in the day, and demanded that she take a shower, thinking that we would now have hot water instead of the lukewarm we enjoyed for the first 3 days. We could tolerate it outdoors, it being her smell, but when we were trapped in a taxi with her the stink was more than we could bear.

She was going to take a shower!

Have you ever heard a 6 year old little girl scream…no, I mean REALLY scream?

The top of your lungs, no holding back, didn’t know the human voice could hit such a pitch kind of screaming.

I was convinced the windows would break! That any moment a banging on our door would reveal a swarm of fellow guests trying to determine for themselves what horrible acts were taking place beyond the door of room 304.

I peeked out of the window overlooking the street below our hotel room, sure enough, the shrieks had carried to street level, and a passerby shot an inquisitive look in the direction of the noise.

As I hid behind the curtains, I wondered to myself if my daughter would remember this experience with fondness or if I was responsible for an emotional scar that would be revealed during a session with her shrink.

Screams of NO, PLEASE! STOP, PLEASE! filled our room, and echoed through the courtyard of the hotel.
I tried to encourage her to think about it as part of the experience, to embrace it as an example of the differences between our two cultures. She needed to know that the cold shower would only last a few minutes, but that the experience would become part of a lifetime of memories to cherish. That character is shaped through adversity and it is how we handle ourselves during these trying times that set us apart from others.

We’re Not In Kansas Any More

That trip to Ecuador for Spring Break was the beginning of a lifestyle change that would take all of us to more countries than we would ever imagine, and an opportunity for my wife and I to share many, many more wonderful experiences with both of our kids. Our adventures weren’t without challenges, often more difficult than simply a cold shower, but it was the experience of sharing and overcoming these challenges as a family that ultimately brought us closer together.

On the plane ride home my daughter watched The Wizard of Oz on DVD. After it was over, I talked to her about how her adventure to Ecuador was very similar to Dorothy’s experience in Oz, how they were both great journeys that taught them a lot about other people and themselves. Traveling with kids teaches them that the world is not made of middle class suburbs, and they are able to see, feel, and experience the way other people live. It can also teach kids they’re capable of more than they thought, and show them the power of compassion, courage, loyalty, and patience we each have inside ourselves.

During the trip home we asked the kids what they thought were the best and worst parts of the trip. My daughter liked seeing the llama’s, visiting the outdoor markets, and watching the indigenous dancers. Her least favorite – cold showers.

To be notified of our next Ecuador Tour, register for our email list.